A friend of mine who lives in Tampa finds it amazing that any crop can grow in Upstate New York at all. "It's too cold," he insists.  He looks at me skeptically when I describe how much of New York is farmland.

Despite my friend's climatological snobbery, any overflight of Lake Ontario's south shore will reveal field after field of neatly arranged fruit trees. If I were to tell my friend that Wayne County (the next county east from Rochester) is one of the top apple producers in the nation, I am quite sure that he would be dubious. But it's true. Wikipedia even says so.

The Williamson-Sodus Airport (SDC), cleverly named for its position between the rural metropoli of Williamson and Sodus, lies in the heart of orchard country along Lake Ontario.  In the third week of May each year, the town of Williamson (where Mott's has a significant presence) celebrates its Apple Blossom Festival and the airport hosts a terrific fly-in breakfast.  This year's festival was bittersweet.  The early warm up followed by a killing frost earlier this season means that much of the region will fail to produce fruit in 2012.

Since she was two years old, The Bear has known the difference between helicopters and airplanes.  She will often thump her chest in imitation of a rotary wing's distinctive "whump-whump-whump" as it cuts through the air.  My friend Ray (this would be "mechanic / helicopter pilot" Ray, not "airport-owning / patron saint of aviation" Ray) flies helicopter rides each year at the Apple Blossom fly-in.   I promised The Bear that she could get her first helicopter ride with Ray.  This promise incited much enthusiasm, particularly because lousy weather forced me to renege on the same promise made in 2011. 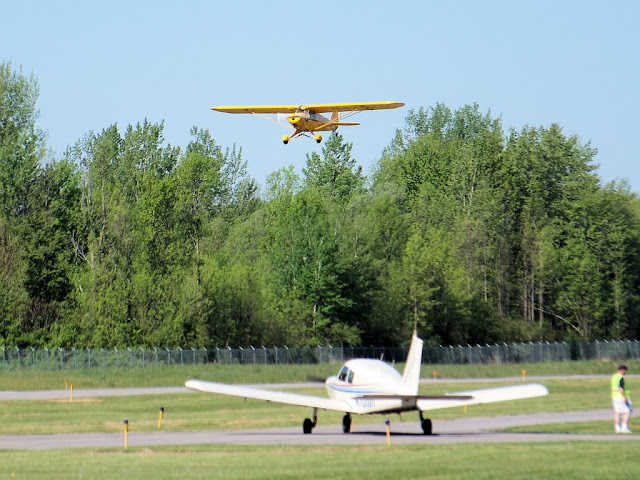 The traffic pattern at Williamson-Sodus was hopping when we arrived over the field at 8:30 am Sunday morning.  Fly-in visitor aircraft were coming and going, several other airplanes were flying rides for drive-in visitors, and Ray was maneuvering the helicopter north of the airport below all of the fixed wing chaos.

After landing, we were carefully marshaled to parking on the crowded ramp by a group of well-organized volunteers.  Because the ramp is relatively small and there was a single taxiway available for access that morning, well-orchestrated ground traffic control was essential.

As we walked through the crowd, I pointed out Ray's helicopter to The Bear.  "There's the helicopter you're going to fly in."

The Bear minced no words.  "Pancakes first," she stated firmly.  Clearly, the little hobbit was ready for second breakfast.

Along the way, we encountered Joe, one of the organizers.  Joe introduced us to Randy and Dave, both denizens of the AOPA flying forums with whom I had interacted on-line, but never actually met. 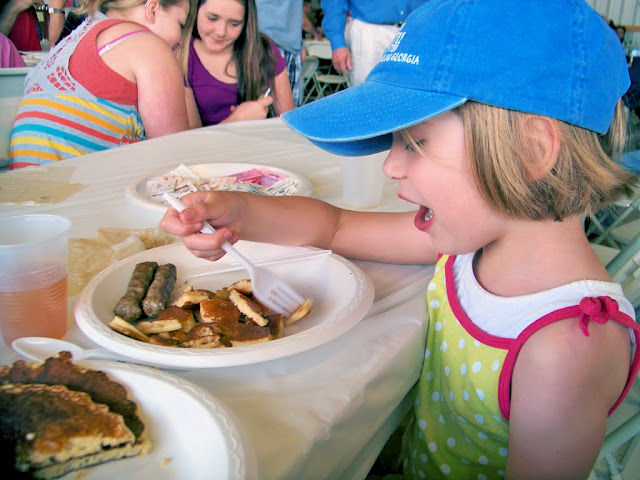 The Bear insisted on two huge pancakes and ate them all.  Predictably, no orange juice was available, but the Mott's apple juice was flowing freely.  Careful examination of the above picture will show where The Bear's first cup of apple juice flowed freely across the table.  She was quite happy to drink mine in addition to the replacement I found for her; that kid can really put away the apple juice! 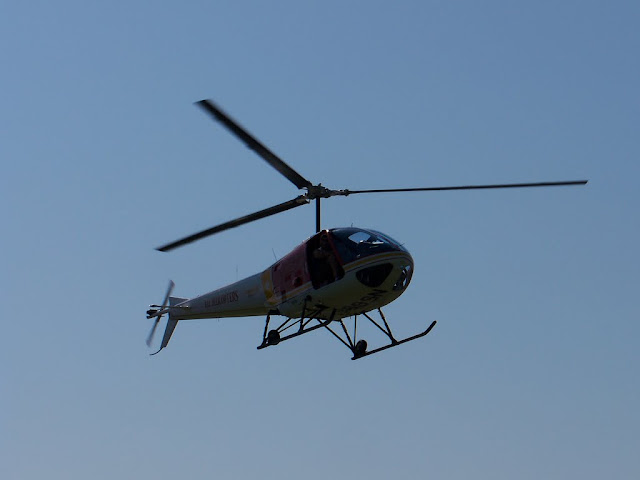 After breakfast, we wandered over to where B.A.C. Helicopters was staging riders and paid for our tickets.  Soon enough, Ray appeared above us in his Enstrom 280-F helicopter. 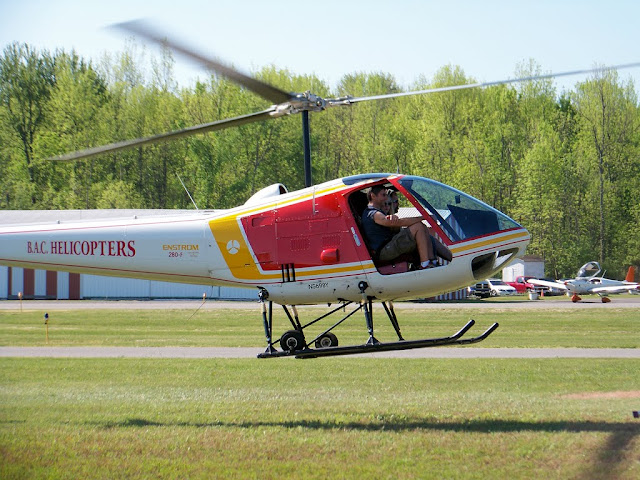 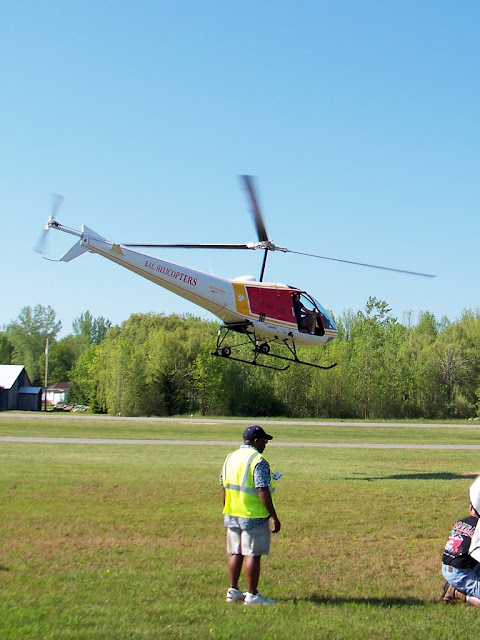 The chopper settled gently to the ground, disgorged passengers, and loaded up with new riders.  I don't think Ray had any rest that morning.  While we waited our turn, Lance performed the seat belt demonstration.  He crouched down low and looked The Bear in the eye.  "Now, I know you already know how to do this, but the FAA says we have to show you."

The Bear cast a suspicious look in my direction.  "So, if we screw up and fall out of the helicopter, Lance can say, 'hey - we told 'em'," I added.  Lance grinned and nodded at the practical reality of my comment while he finished his demo. 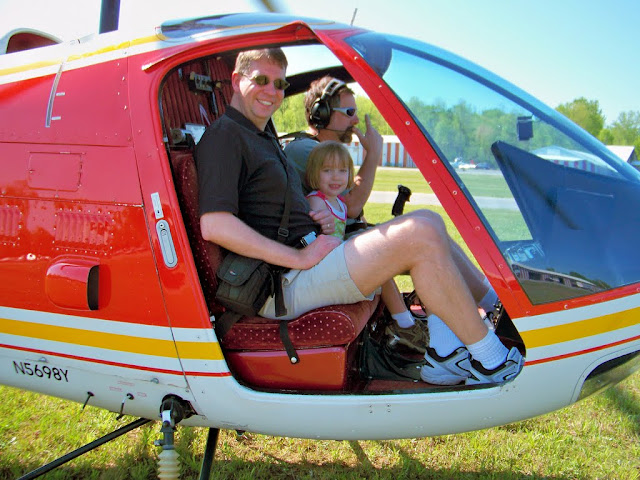 When Ray returned, we followed Lance out to the helicopter doing that half-crouch, half-run thing that I first saw on M*A*S*H as a kid.  The Bear embarked first, I cinched down her seat belt (good thing we had the demo), then climbed in next to her.  Ray and I shook hands in greeting and Lance took our picture. 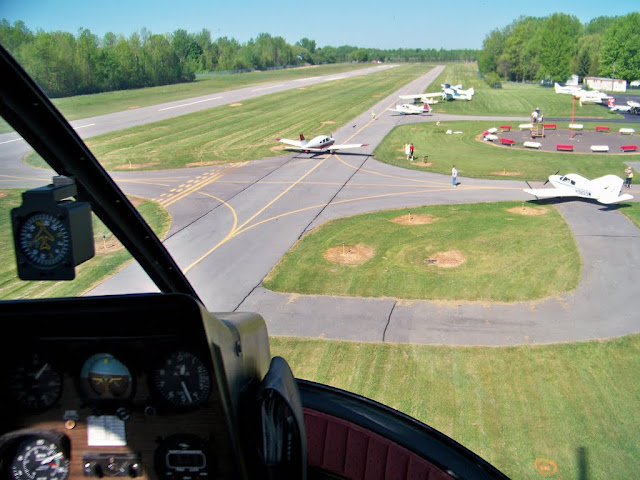 Without much ado, we climbed into the air, just a few hundred feet off the ground. 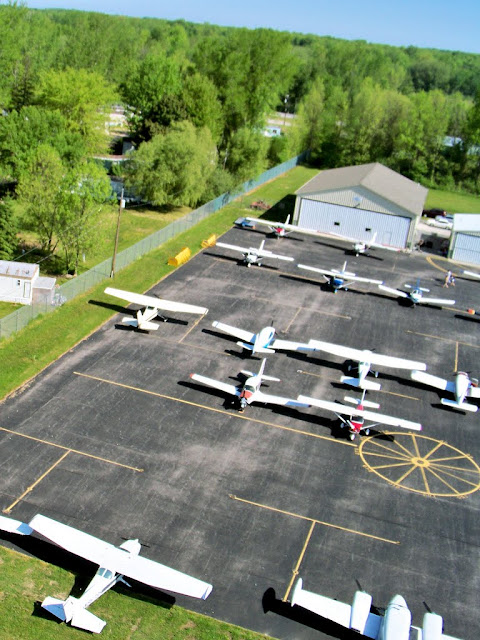 We departed opposite the direction of landing traffic, making a right pattern to the north of the airport.  Ray never climbed above 600 feet. 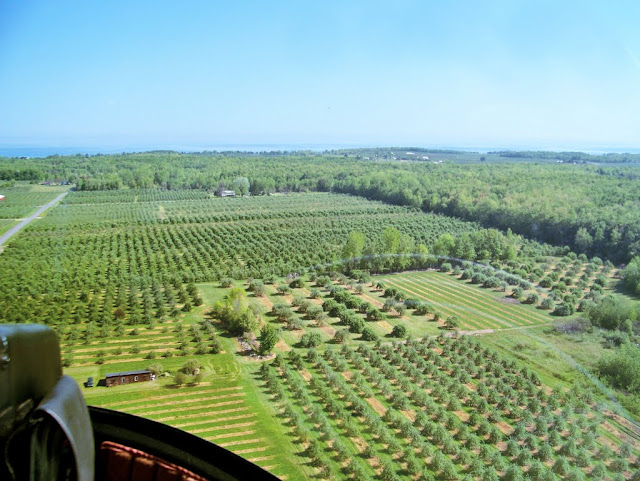 We flew low over the orchards, not quite reaching Lake Ontario.  Not accustomed to flying so low, I felt like we were skimming the tree tops (we weren't).  My shirt sleeve flapped in the slipstream from the open door.

"How are you doing, Little Bear?" I asked.

"Good!" she bellowed with enthusiasm and snuggled up against my side as the farmland rolled along beyond the clear bubble at our feet. 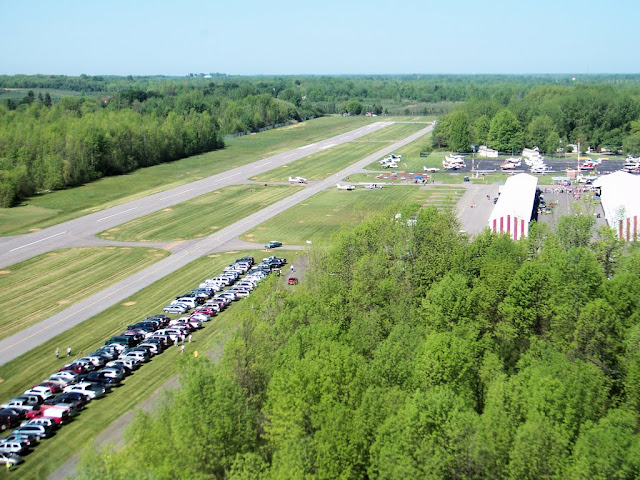 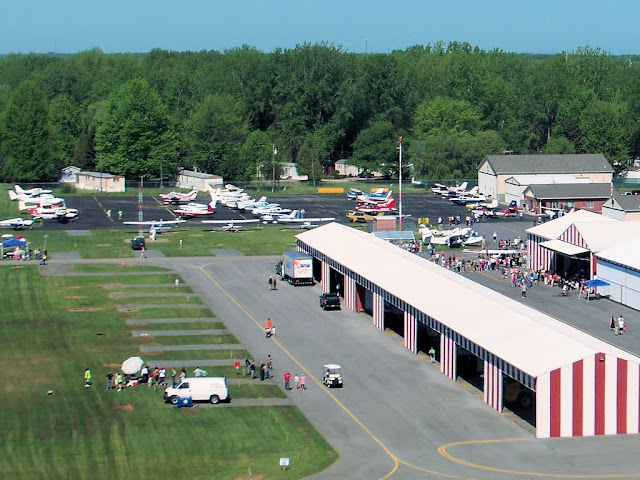 At the end of our ride, the airport materialized as a clearing in the trees and we settled back into Ray's landing spot.  Lance had the next pair of riders waiting.  I do not know how long Ray hopped rides that morning, but we still heard him on Unicom as we landed at Le Roy.

The Bear was pleased with her helicopter ride, but it had been an early and exciting morning.  She was clearly tired.  While we were admiring a Yak-52 on display, I mentioned to her that it was for sale.

"Daddy," she said in a tone reserved for the impossibly dense, "we already have an airplane."

"I thought this one could be yours," I suggested.

And so we did.

As usual, a warm airplane, a belly full of pancakes, and lots of morning excitement led to the usual result... 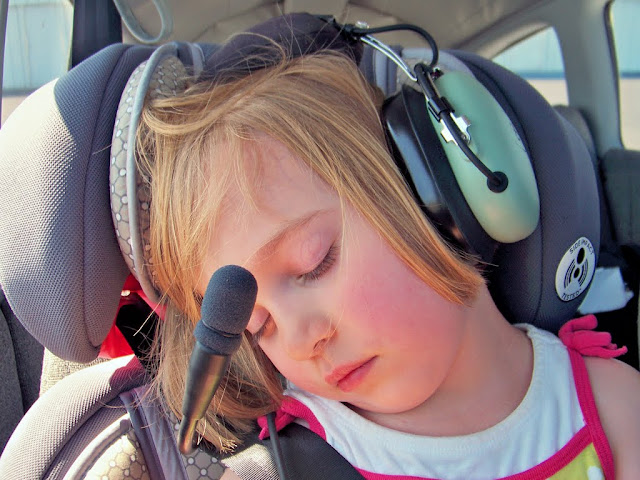 Back at Le Roy, after her power nap and a fruitful morning of thinning the herd of insects populating Upstate skies, The Bear helped me clean the wings and cowling of the Warrior.  Then she sat at her workbench and eagerly asked to sign my logbook. 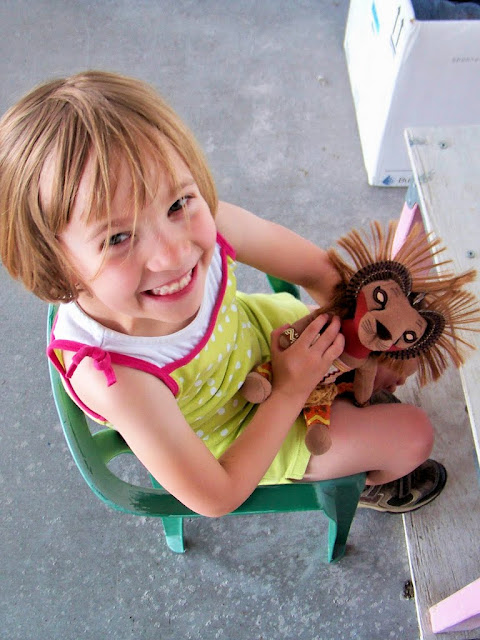 Another exciting event in the life of a young aviatrix had come to an end and the day was not even half over!  She could not wait to see Kristy and tell her about the helicopter ride.

Thanks to Joe, Randy, Ray, Lance, whoever mowed "10" into the grass at the approach end of the runway, and the rest of the folks from the Williamson Flying Club for holding such a terrific, well-organized fly-in!  Later that day, I received a message from Joe saying that they served 1800 breakfasts that morning.