The temperature in Le Roy maxed-out at 78°F today, with atmospheric haze and a threat of afternoon thunderstorms. It was not exactly a typical day in March.

I was en route to Skaneateles Aero Drome (pronounced "skinny atlas") for two reasons. First, I had never been there. Second, fuel prices were $5.40/gal. Some of the fields around Le Roy were flirting with the $6/gal mark.

Winds near Syracuse were mostly out of the south. As I flew over Skaneateles, the wind sock provided no differentiation between the two landing options offered by the paved east-west runway.  So I chose to land toward the east.


From the pattern, I noticed two things. The first was that the approach end of the runway used to be much farther west, but a road sliced through the runway end, defining a new threshold and leaving a bit of the old runway on the wrong side of the road to crumble into disuse. The second thing I noticed was a tail dragger parked just north of where the turf runway intersected the paved one, right at the runway 10 threshold.  Standing next to the tail dragger was a woman watching me intently.

On final approach, GPS showed my ground speed to be slightly higher than my indicated airspeed - I had a minor tailwind component.  We came down to earth and I planted the main wheels more solidly than I would have preferred.

While I was fueling, an Archer approached on runway 10 and I stopped to watch.  It was too fast, floating over a significant length of runway before going to ground.  When it did, it thudded down heavily on all three gear at once.  Tires squawked, the nose was low, and the airplane was light on its main gear; it was on the verge of "wheelbarrowing" (this is a bad thing).

Once the Archer backtaxied and departed the airport, a truck towed the tail dragger off the grass and onto the large number "10" painted on the approach end of the paved runway.  Seeing the tow, I realized that something must be wrong and wandered over to offer my help.

A couple had flown the tail dragger, a Husky, into Skaneateles to have breakfast with family.  Given the southerly wind, they decided to depart on the southwest-oriented turf runway.  It was too soft.  The left main wheel of the Husky sank up to the axle.  No longer mired in the soft turf, the pilot was trying to clean mud out of the brake assembly before moving the airplane further.  The rest of us monitored the sky for incoming airplanes.

The woman in the Husky pointed out an airborne Archer in the pattern.  Presumably seeing the stricken aircraft on the end of the runway, the Archer broke off the approach.

"I think that's the same one that landed here after you did," she said to me.

I agreed.  "I was glad when they came in and landed; they made my landing look good."

"Oh, yours WAS good," she responded.  "You were right on centerline."

"And you landed on your mains," deadpanned the Husky pilot, fishing glop out of the brake caliper with the pointy end of a fuel tester.

We continued making small talk until the Husky's pilot declared the aircraft fit for taxi.  Several minutes later, two aircraft departed Skaneateles: an eastbound Husky and a Warrior heading west in hopes of reaching Le Roy before the nasty weather moved in.

All in all, this was a good reminder for me.  There is nothing better than landing on a well-tended grass runway.  But it's best to not be promiscuous about it, especially with a nose dragger like mine.  I try to get to know those fields first.  Fortunately for my new friends in the Husky, they also knew better than to try landing on a grass strip in unknown condition.  They only attempted a backtaxi for takeoff; a landing would have likely ended with a Husky standing on its nose.

A direct route between Skaneateles and Le Roy had me flying along the north end of several of the Finger Lakes, a route that I do not fly often. 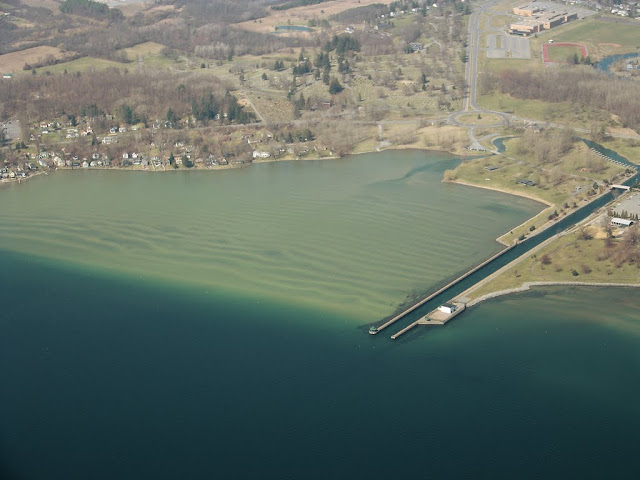 I flew over Auburn, perched on the north end of Owasco Lake.  I was struck by how clear the water was and how easily I could see the rippled bottom of the north end of the lake.  Considering the abrupt color change, I can only assume that the bottom really drops south of the pier. 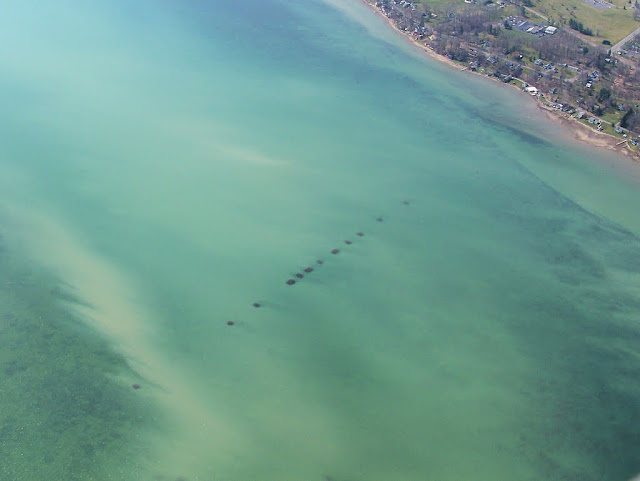 When I crossed Cayuga Lake, I saw this strange dotted line in the water, so I circled to investigate. 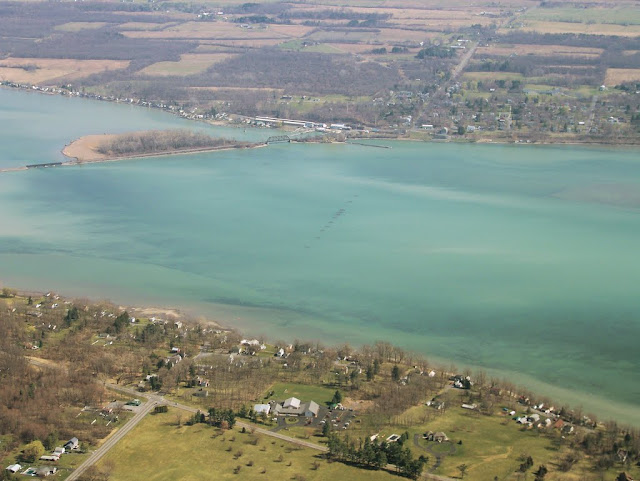 It was quite obvious that the underwater features were exactly in line with roads on both sides of the lake.  Some web research suggests that this is evidence of the Cayuga Lake Bridge.  Completed in 1800, it was a wooden bridge approximately one mile in length, making it the longest such bridge in the Western hemisphere at the time.  This led one source to dub it a "marvel of backwoods engineering".  The bridge was eventually abandoned in 1857.  Another source notes that "the old pilings are visible just under the surface of the water", which would seem to validate my identification of what I saw from the air.

The things you learn just flying around with your eyes open can surprise you.  This is an aspect of flying that I truly relish; the discovery of things that I might not have encountered or observed otherwise.  I enjoy the internet research that illuminates what these things are and reveals their stories. 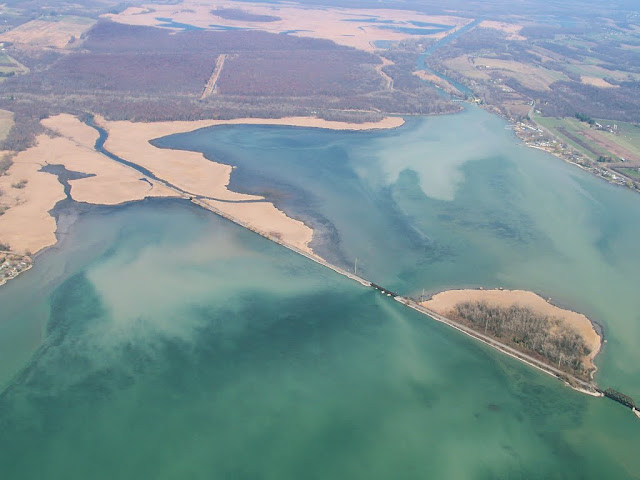 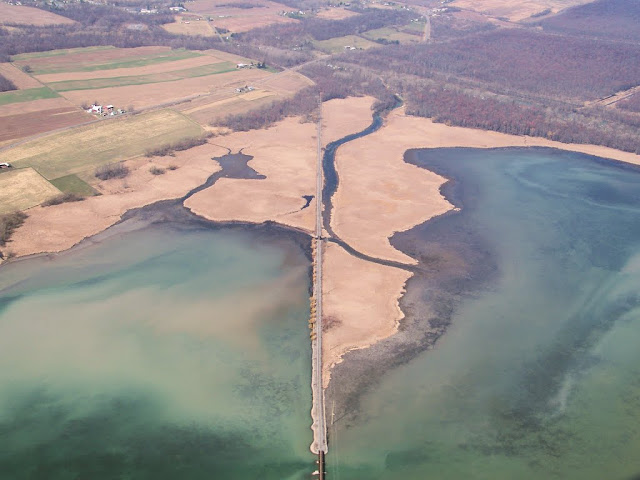 Just north of the former Cayuga Lake Bridge site, a railroad cuts through the marshland at the end of the lake.  The colors in the water and the angular cut of the railway caught my eye. 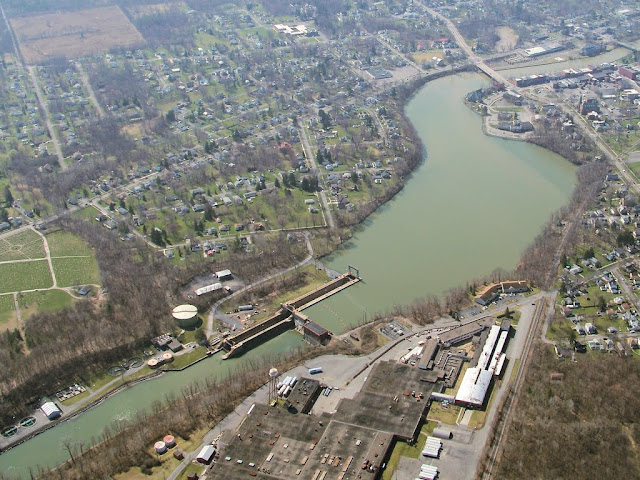 Cayuga and Seneca Lakes are linked together and to the Erie Canal by the cleverly named Cayuga-Seneca Canal.  One of the canal's locks is situated just east of Seneca Falls. 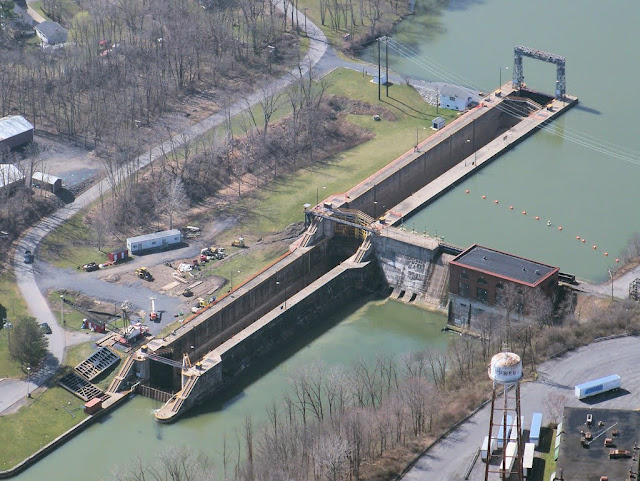 This is a closer look at the lock.

Back at home, I showed this picture to The Bear and began to explain what the lock did.

"Oh, you mean like the thing at the museum," she said off-handedly, referencing a very nifty working model of a lock at the Rochester Museum and Science Center.

Way to steal my thunder, Rochester Museum and Science Center. 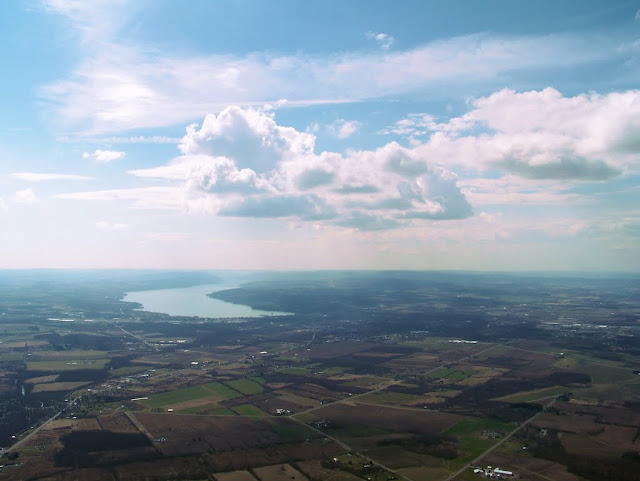 As Canandaigua Lake came into sight, the cumulus was building and the air became commensurately choppy.  Weather was finally moving in; it was time to land and give Warrior 481 her first bath of the year.

Those who were born and raised in New York state learn about the history and geography of New York in school.  I may not have been raised here, but I've learned a lot buzzing back and forth across this beautiful state.
Logged by Chris on Sunday, March 18, 2012