The morning of June 9, we awoke refreshed and feasted on the various breakfast offerings provided by the Wingate.  After a quick trip to Target for some supplies, we returned to the Greenville Downtown Airport.  We were very pleased with our choices of airport and hotel, both were outstanding.


The Bear did not want her picture taken this morning, so we settled for a lovely view of her back.

A Cirrus taxied-in next to us as we were readying for departure.  The pilot was explaining to his passenger that he should not slam the door, just pull it closed and latch it.  While organizing Warrior 481's cockpit, I could only smile and nod.  How many first time passengers had climbed into the Warrior and ineffectually slammed the door?

The other pilot evidently saw my reaction.  "See?  He knows what I'm talking about."  Then to me, "why is it that everyone wants to slam the airplane door, anyway?"


Some quick thinking from Kristy resolved the first crisis of the morning.  Metal seat belt buckles in the back seat of the Warrior were scorching hot and The Bear wanted no part of them.  Kristy's remediation strategy involved fashioning a protective pad from a pair of The Bear's My Little Pony underwear.  With crisis averted, we were ready to fly.

Greenville tower negotiated radar flight following for us with Greer Approach and, before long, we were on our way.  Consistent with our previous experience flying through Georgia, it was extremely hazy.  Visibility was probably on the ragged edge of five miles for much of the route toward Savannah.  Savannah was chosen as a waypoint because a direct flight to Jekyll Island would have routed us through some military and restricted areas.  From Savannah, we could find clear passage south to Jekyll between the Atlantic coastline and the MOA. 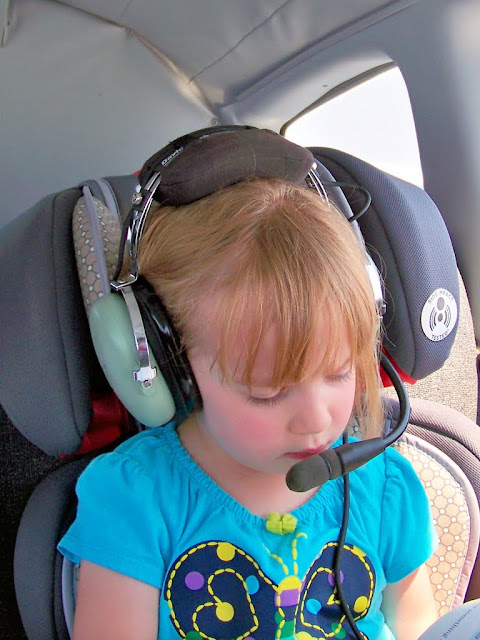 The Bear stayed reasonably entertained on this leg of the trip by reading and coloring. 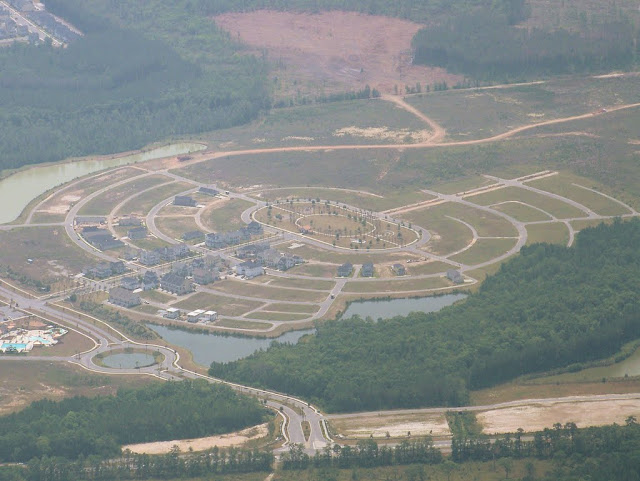 Near Savannah, we saw some interesting developments like this one. 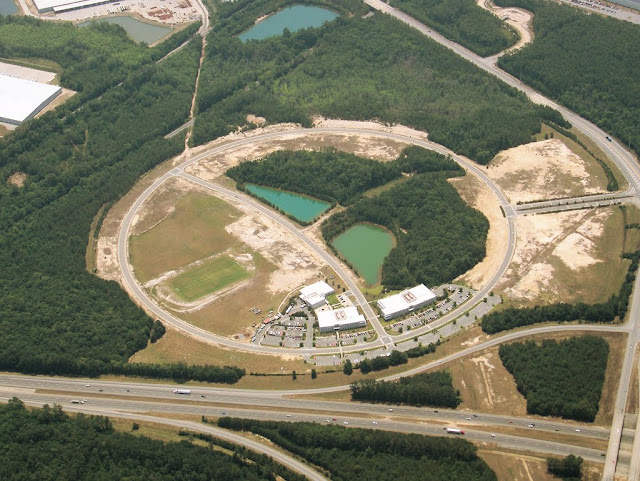 And this one, which Google seems to think is the Savannah campus of Georgia Tech.


Savannah has multiple approach frequencies and we overheard the controller's half of an exchange with the pilot of a Grumman Tiger.  The controller was asking the Tiger to turn several degrees east to avoid the R-3005D restricted area, which was hot (active).  The controller also asked the pilot to remain at or below 3,500 feet.  Both requests were made at least twice and, though we could not hear the Tiger pilot, he or she was obviously pushing back on these instructions.  Finally, with exasperation evident in his voice, the controller said, "look, I'm trying to keep you out of an active military restricted area and below three thousand five hundred so that you don't shut down all the arrivals and departures at my airport."  This seemed to finally convey the message; we heard no further discussion on the matter.

As we changed course over the Savannah / Hilton Head International Airport to follow the shoreline south, The Bear discovered airsick bags tucked into a seat pocket.  In nine years of flying passengers, I have never made anyone sick, but I picked up a set recently rather than tempt fate any further.  The Bear asked Kristy about the purpose of these strange objects.

"They're for when people get sick while flying in the airplane," Kristy explained.

"Oh.  I NEVER get sick," The Bear proclaimed.  At that moment, the airplane bumped as we descended into turbulent air off the coast.  Kristy groaned on the intercom. 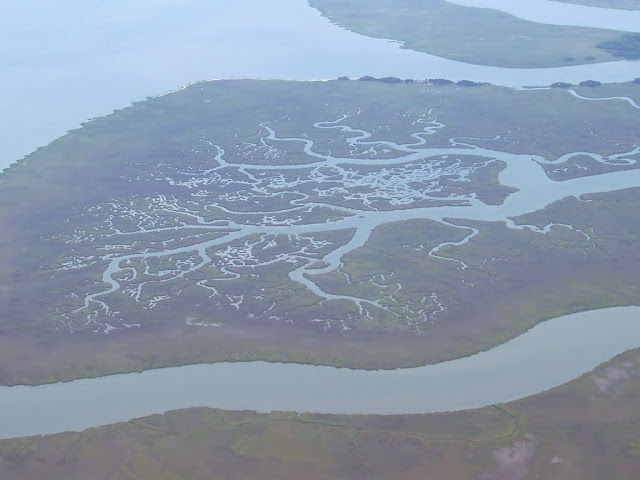 A new mystery: why is the White Tree of Gondor depicted along the Atlantic coast? 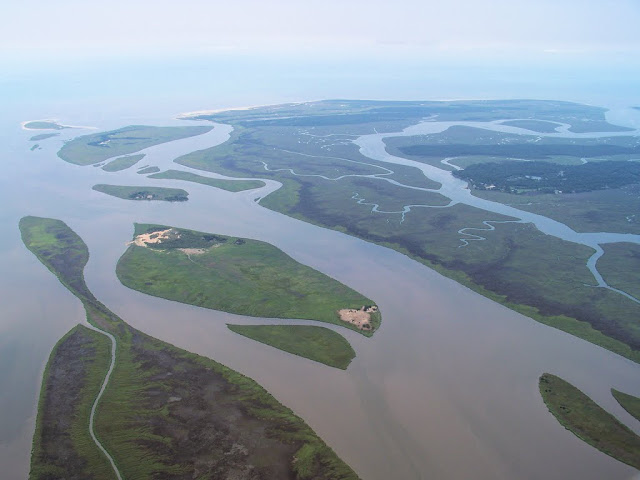 Canals and inlets abound along the stretch of coastline between Savannah and Jekyll Island. 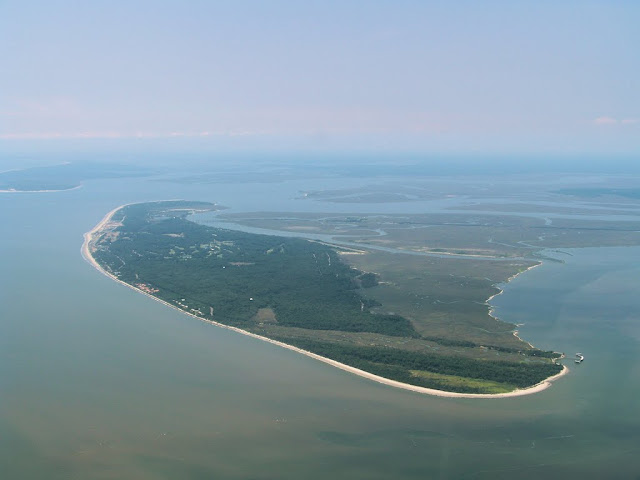 Finally, our destination came into sight (above).  Winds favored runway 19 and we circled the island over the ocean to enter the pattern appropriately.  Although there are no remarks in the available airport information that prohibit flying over the island (like, say, Mackinac Island), we remained offshore as a courtesy to those below. 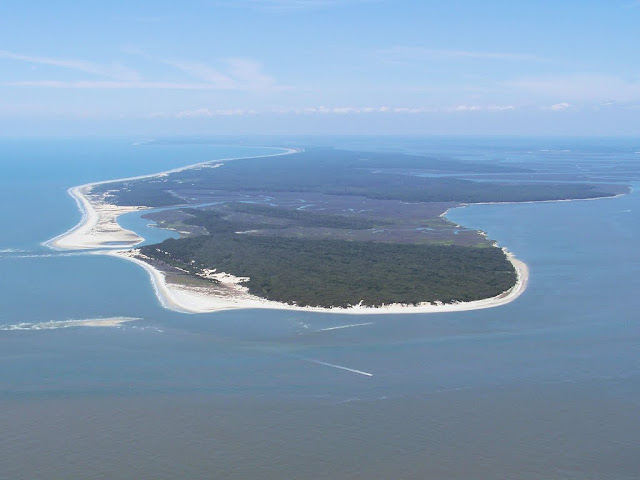 As we circled south of Jekyll Island, we had a great view of Cumberland Island, which is owned by the National Park Service.


Looking at the Jekyll Island Airport, it was clear that the Cirrus pilot from Greenville was right.  The entire airport was a small, man-made oasis of solid ground surrounded by swamp; not a good place to miss the runway.  In the heat of the day, Warrior 481 settled into ground effect over hot asphalt and did not want to come down.  When she did, it was with a clunk after floating halfway down the runway. 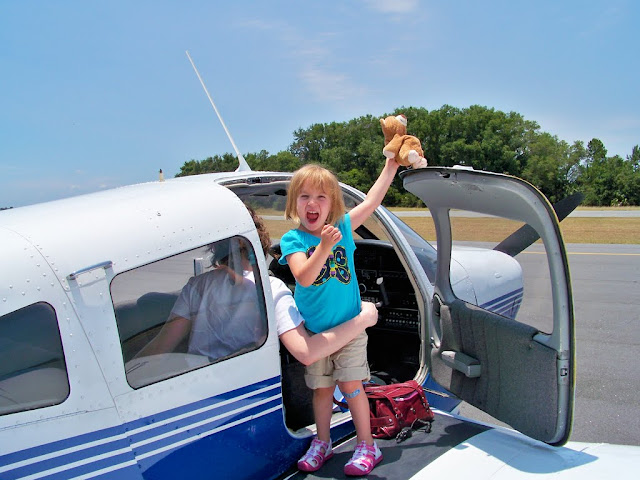 The Bear excitedly emerged from the airplane to explore the island.  She was very intrigued by the idea of being completely surrounded by water.  She and Kristy wandered to the terminal building while I secured the airplane and wiped the worst of the bugs off of the wings.  When they returned, The Bear was very excited about the dog she had just met inside the terminal building.  I explained to her that all great airports had airport dogs, so this was a good sign that we were in a great place. 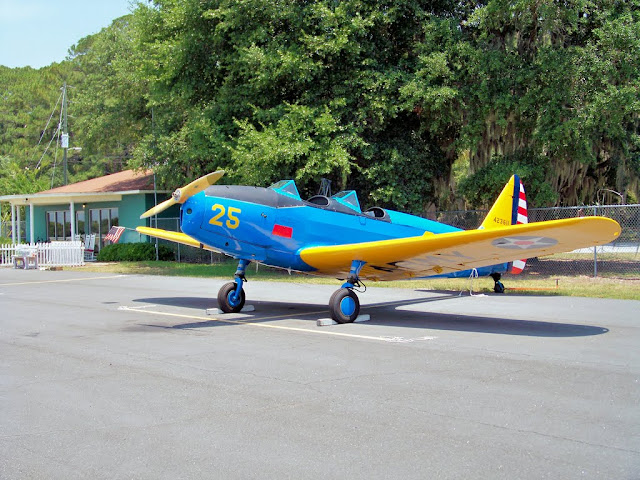 Another good sign was this Ryan PT-19 based at Jekyll that is used for sightseeing tours of the island.

We stayed at the Hampton Inn, the nicest Hampton Inn I have ever set foot inside.  The hotel provided free shuttle service to get us around the island, which meant that The Bear provided several minutes of entertainment to various drivers throughout the day.

Throughout the day, we also learned more about the island itself.  It was once the playground for the most affluent American families of the early 20th century.  In 1910, the wealthiest men in the United States met on Jekyll Island and laid the groundwork for the US banking system.  Massive cottages on the island belonged to guys with highfalutin' surnames like Rockefeller, Vanderbilt, and Pulitzer. 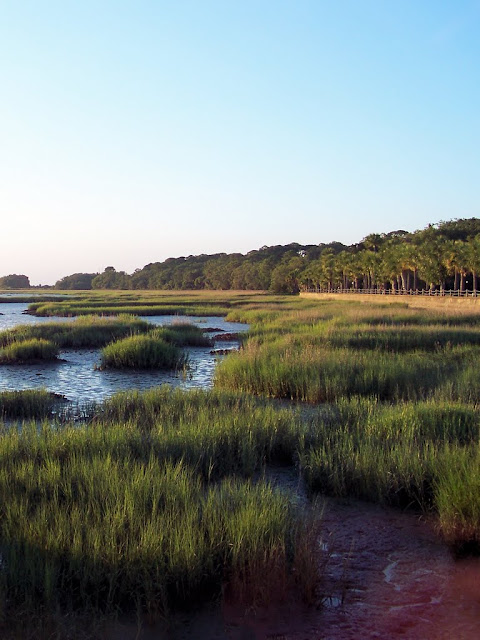 That night, we dined on fresh, local shellfish at Latitude 31.  It certainly rated as the best meal of the trip.  The restaurant was on a wharf extending from the historic district of Jekyll Island where all the rich dead guys had their "cottages".  As we dined on a bounty from the sea, we could look north along the shoreline to the trees bordering the south end of the airport (above).  The vista from the window of our local Red Lobster does not hold up well in comparison, nor does the cuisine. 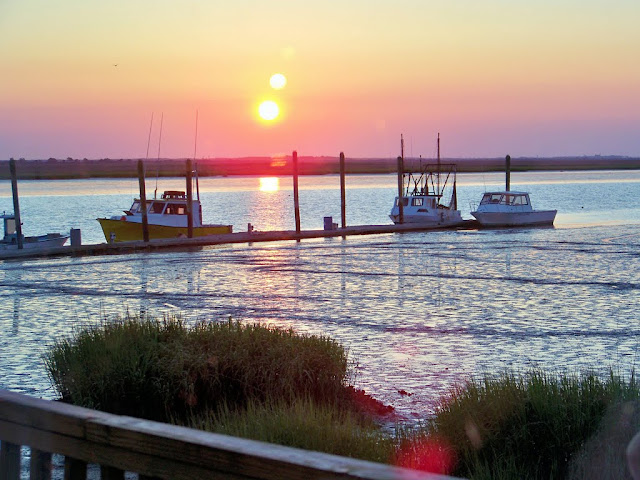 The sun set over the harbor while we were eating dinner (no, we're not on Tatooine, the double sun effect results from photographing through double paned glass).  It was a magnificent evening. 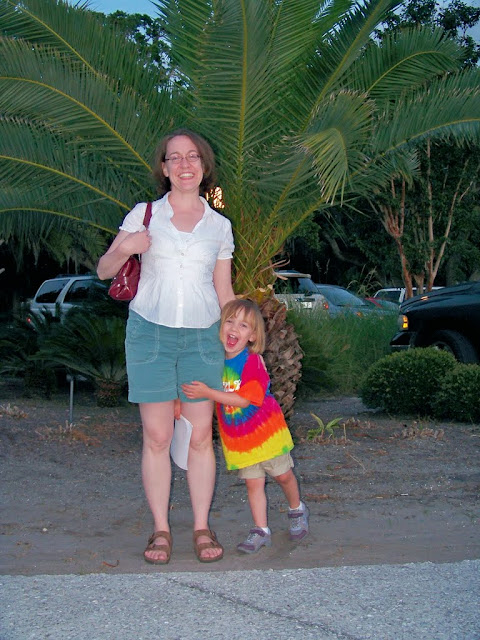 Kristy and The Bear clowned around in front of a palm tree while we waited for the shuttle to pick us up.  When we returned to the hotel, the driver brought the cabin lights up slowly, eliciting a "that was so COOL!" from The Bear.

We ran out of time to swim, but ended the evening literally cooling our heels in the Hampton Inn's pool.

Jekyll Island was one of the major highlights of the trip.  The airport, the Hampton Inn, the Georgia Sea Turtle Center, and the restaurants (those that we visited) were all top notch and the people were wonderful.  Our one regret about Jekyll Island is that we did not plan for a longer stay!
Logged by Chris on Thursday, June 09, 2011